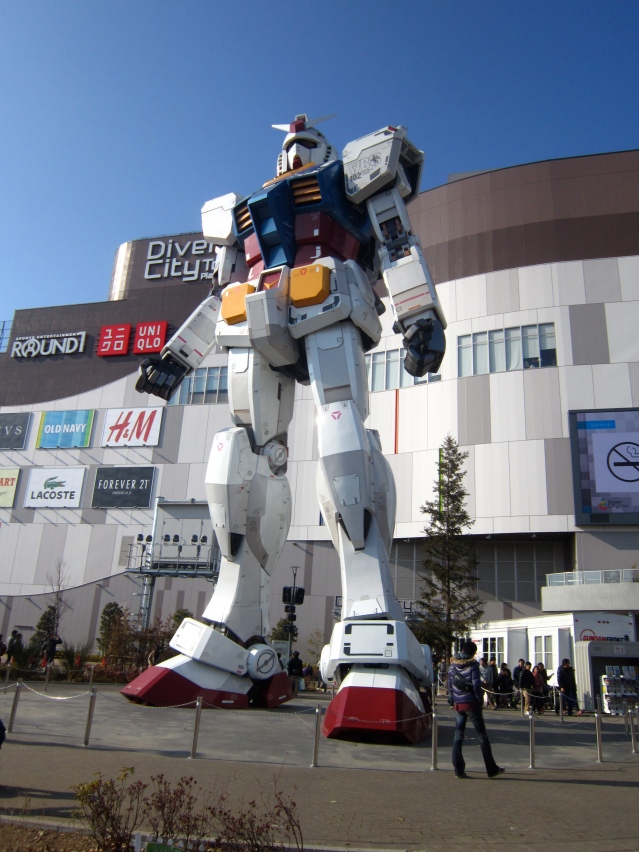 Okay I couldn’t help it with the title! But seriously, I SAW GUNDAM ROBOT!!!! For everyone who doesn’t know what I am talking about, right now at Diver City center on Odaiba island there is this HUGE robot on display. It is replicated from a famous Japanese anime. I have not watched the anime or anything, but I had seen pictures of the robot. It was a must see on my bucket list. Here I was just following my host family around and BAM! It was there! I was really incredible. I always thought I was a little above tourist attractions, but no, I am not. I would even go again just to see it at night.

We had a holiday on Monday (the 11th) and so my host family and I rode bikes to Odaiba. They first took me to see the little Statue of Liberty replica. It is crazy how I was studying in New York last semester. Now I have seen the real thing, and one in Tokyo! I still don’t believe that I am in Tokyo! We ate lunch in the Diver City center (From what I understand from being there, Driver City is similar to La La Port. Though I think it is larger, with arcades in addition to the clothing stores and food courts. ) I had this huge plate of omurice there!!!! YUM!!!

Sakura also had these tickets for free bowling. All we had to pay for were our shoes. I hadn’t bowled in a long time. But, for the most part bowling alleys are the same in Japan as the United States. Even though they had designated smoking areas, it smelled like cigarettes. Also, the place lit up in neons. The only thing missing was music, oddly enough. There was no music playing. I actually won our game too. I seriously would have gotten gutter balls every time, but since it was the girls first time bowling we had the bumpers up. This allowed my score to reach new heights. It was so much fun hanging out the four of us girls!

After the game we rode back to Toyosu. Kokoro fell asleep on the bike ride home (she was riding on the back of her mom’s bike) and Sakura had something for school to go to. So we kinda parted when we reached the apartment. Aya-san, Kokoro and I went grocery shopping. Usually I think I am just home alone when they go grocery shopping. But Kokoro insisted that I come too. When she did this I was so touched. Because I am not the best at Japanese it can be hard to understand what is exactly going on, and it is easy to find myself just home. It felt really incredible to have Kokoro reach out to me like that. Especially since she likes to have her mom to herself. But in that moment she was accepting me as a part of the family. I hope this continues! Also, at Driver City there were so many cosplay! It was crazy to see everyone in elaborate wigs and make-up!