Okay. I understand I’m supposed to be posting about Rome. I know I’m supposed to be living IN Rome and enjoying the city I’m living in, because someday I’ll be an old spinster with 50 obese cats with only a memory of Temple Rome to keep me warm at night- I’ll never have this opportunity ever again, blah blah blah, YOLO, et cettera. I get it. But when you live within 4 hours of some of the most beautiful and historically important towns in Europe… well, can you blame me for hopping on a train every chance I get and exploring them? So bear with me one last time while I tell you about my travels outside of La Citta. Then I promise we’ll get back to talking about Rome. Really.
Let’s get started then. Last week’s destination? Florence.
Or not.
Fun-Slash-Magali-Is-Exponentially-Stupid Fact: Florence is not an Italian name. Florence is the English translation of the city’s real name, which is Firenze. I’m telling you this so that you don’t make the same mistake I did, which is wasting about 48 hours wondering why anyone would name a town after the centaur from “Harry Potter and the Sorcerer’s Stone”. On a similar note, when Wale stopped by Temple for the orientation concert like a bajillion years ago, I went around calling him Whale until somebody smacked me in the head with a food tray and put me out of my white girl misery. Misnaming is not exactly new territory for me.

Anyway, let us resume. Home to Botticelli’s “Birth of Venus”, the Medici mafia, and some seriously bad street performers, Firenze is one of Italy’s most important cities, both historically and culturally. This is Leonardo da Vinci’s stomping ground, after all. Here is where the Medicis built the modern-day equivalent of El Dorado. There is a 45% chance that Dante himself threw back absynthe here. This very spot is where Savonarola was like, “Yo Florence, clean your act up, otherwise Lucifer the Prince of Darkness is gonna getchu.”

Forward-thinking at its finest, people.
But who cares about all that? I was making my way to the lovely city of Florence/Firenze to visit my lovely friend Chrissie, who’s studying abroad at SACI art school from the Maryland Institute College of Art.
This is Chrissie. Say hello.

We’ve known each other since elementary school, so to be able to get together even while we were both abroad is an amazing blessing. So with an excitement witnessed perhaps
Here are the highlights from the trip:
The Chocolate Festival
After reuniting at the train station McDonald’s (really), Chrissie and I made our way to her apartment, which just a couple of blocks away from the Duomo. On the way there, we bumped into a group of yellow tents, which Chrissie enthusiastically informed me was the annual city Chocolate Festival, where local chocolatiers sell everything from white-chocolate dipped strawberries to fudge with peanuts and bananas for a week every year. Yup, you heard right- a festival dedicated entirely to CHOCOLATE. There was not a single green food product to be found anywhere. I mean, it was like the universe wanted me there. The next day we rose up early to come back to the Chocolate Festival and engage in various acts of gluttony that would probably get me sent to the emergency room were I nearby any sort of responsible adult. We munched on waffle sticks dipped in dark chocolate, apricot-flavored macaroons, and drank hot dark chocolate that tasted more like liquid Hershey’s syrup than Nesquik. We continued to repeat this ritual for the following two mornings.

Thumbs up, Florence. What a town.
My hostel
I stayed at Locanda Daniel in Via Nazionale and let me tell you how great it was. It was so great that I actively chose to take a shower in there, even though it was full of strangers and I’m paranoid about stuff like that. I felt that comfortable. For a little over 20 euros a night I got the most comfortable bed of my life in a very central location and a view of Brunelesci’s dome that made me want to jump off the balcony.

The Uffizi Gallery
The Uffizi Gallery in Florence is home to some of the most iconic and beautiful works of art dating from late antiquity to the Reinaissance and Baroque. If you’ve ever heard of Botticelli or a little guy called Leonardo Da Vinci (I think Tom Hanks played him in a movie not too long ago?), this is the place that houses some of their most important works, like “The Birth of Venus” and the “Annunciation”. It is also incredibly difficult to find, if only because there are so many different ways to get to it. It took me the better part of the day to bump into it- I guess I could have looked at a map or researched it beforehand, but let’s be honest: that sounds like responsibility and I take no part in that. Besides, I’m trying to be more “spontaneous”. That’s what studying abroad is supposed to be about, right? Just hopping on a random bus and praying you don’t get murdered?

Anyway, once we got there we had about two hours to wander around before closing time. We rushed through about a couple of centuries of masterpieces, including works by Artemisia Gentilesci (aka the first relevant woman in the history of western art), and an entire room dedicated to Caravaggio (swoon). Once we realized that we had accidentally skipped the room with Botticelli’s “The Birth of Venus” and “Spring”, we sprinted up 15 gallery rooms five minutes before closing time to see the pieces. It was like that scene in “The Dreamers”, only none of us was naked for 90% of the rest of the film. We finally found it in Gallery 10. It was, in a word, breathtaking. 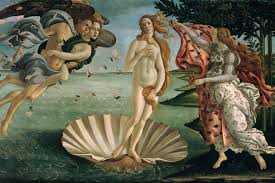 The Uffizi is more rude about taking pictures than the Swiss Guard at the Sistine Chapel, so here’s a copy I got off Google.
The Palazzo Vecchio
If only for the lol-tastic ceiling paintings.

Tour of SACI
On the second day, we stopped by Chrissie’s studio at SACI, and checked out her artwork. SACI is a study abroad program for art students from the States, and it’s pretty similar to the Tyler program at Temple- students get their own studios, they get exposed to some of the greatest works of art in Western civilization on a daily basis, and learn about all sorts of vegan options to be had in Europe. SACI also offers classes in frescoes, some of which I got to see. The building put Tyler to shame (sorry not sorry) and the work by the students was so good that I didn’t even mind that most of them worked in modern art.

Brunellesci and Ghiberti’s Respective Masterpieces
Thank you, Professor Kline, for instilling in me a fangirl passion for a piece of ecclesiastical architecture the likes of which has not been witnessed since the last Twilight movie premiere. If you’ve never heard the story, it’s a tale as old as time- basically, Filippo Brunelleschi and Lorenzo Ghiberti were two great artists/architects/geniuses who battled for commissions all the time and created two of the biggest masterpieces of the Reinaissance in the process. I know they’re two dead white guys, but they knew their stuff- the Dome is Florence’s main attraction and an architectural feat, and the Gates of Paradise are basically blinding in their beautiful golden depictions of scenes from the Old Testament.

Ambulances kindly stationed near just in case of fainting
Reuniting With Old Friends
This is gonna get real cheesy, so if you’d rather not, here’s a video of a puppy that looks like a cotton ball to use up your time alternatively. Let’s get one thing straight- Leonardo is a queen, and I’ll never forget the way I clutched at the bars in front of “The Gates of Paradise” (which I later found out were reproductions , and the originals were housed in the Duomo museum, which I passed about fifty times in the span of one weekend but never went inside of. Ha. Ha. Hahahahahahahhaha *raises a knife in the air*). But the best part of all was gettting to see my friend again. As lame as it sounds, my favorite night wasn’t spent out partying with Italians or frolicking around beautiful churches- it was the night we decided we were too tired from sightseeing to go out and chose to stay at home watching “Bridesmaids” and “Bridget Jones’ Diary”. Florence is amazing and all, but so are my friends- and getting to spend some time with my closest one while living in a strange city with new people and new dialects really helped put things in perspective. Sometimes it can get pretty lonely living in a new place and doing things you’re not really used to on a constant basis. Having a friend there really helps you build a kind of home… even if it’s in the same city where Leonardo went out in drag every Friday or whatever.

Up Next/Predictions
NOPE. Sorry, but since midterm week is coming up, I will be AWOL for, oh, I don’t know… a month. That’s probably how long it’ll take me to recover from studying. We have class while we study abroad? Those classes still follow normal educational models of testing? What?