One of the university led trips this semester was to Fuji-Q, an amusement park at the base of Mt. Fuji known for several world record holding roller coasters, the latest called Takabisha (which holds the record for the steepest drop). We all met up to leave for the park at 7 AM at TUJ, but since the girl’s dorm has a rule about not leaving before 6:30 AM we had to get special permission and we cut it a little close for my taste. Our group took a bus up to the park and since there were more students than seats, some of them had to pull out the small child seats that went out into the aisle. It was a somewhat comfortable two-hour ride with a rest stop along the way. 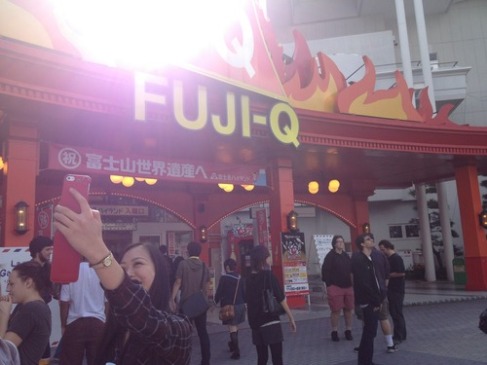 We arrived at Fuji-Q around 9:00, which was before most attractions were open. Upon receiving our day-pass tickets along with our lanyards to store them, the original plan was to hit up the haunted house first. But that didn’t open until ten so it was off to the first of the big three roller coasters: Eejanaika. While waiting in line we were greeted with a T.V. screen displaying the ‘mascots’ of the park, a bunch of Power Rangers aptly named the Fuji-Q Rangers. They displayed the various safety instructions and ‘dos and don’ts’ of both the ride and the park and finished off with a catchy little tune for Eejanaika, along with a dance that ended up being quite popular with our group.

Eejanaika was a thrill. Having made multiple visits to Cedar Point in Ohio, I’m used to about all roller coasters can give me, but this one threw me for a loop (no pun intended). I’ve been on rides that dangle your feet, make you stand while you ride, and all sorts of mechanics but this one had fully mobile cars that spun in every direction. You ride up to the first drop backwards so you have no idea where you’re going or when you’re going to drop so that alone was a doozy. The coaster spun us around, flipped us upside down, and blinded me with my own hair, but it was the most exciting ride I’ve been on in a while. It makes me feel like American theme parks really need to step up their game.

Now that we’d gotten some screaming out of the way, it was time for the haunted house! Well… haunted hospital. Which just made it creepier. If there’s anything the Japanese know how to do, it’s scare. And the sense of ‘scary’ here is a lot more subtle and atmospheric rather than an American style horror where everything just pops out at you. I’m more easily startled then I am scared, so the American horror is actually pretty effective on me, but that didn’t stop me from being terrified the first ten minutes of this haunted house.

Since we were in a group of six it was a little less nerve-racking, and they were kind enough to provide a flashlight for most of it, but the initial hallway got the jump on us. One ghoul leaping out had half our group tearing down the hall into the nearest source of light. The whole hospital panned out like a maze through four floors and a dank and spooky basement. It took a good half hour, maybe more, to make our way through even though it was just one long, directed path. Most of the rooms were silent save for the occasional banging or loud shriek (most of the time not from the parties ahead of us).  The whole thing was filled with gorey, scary, and just plain unsettling imagery that had us convinced something was going to grab us. Oddly enough, nothing ever did, and most of the fear was in our minds. We caught on about a third of the way through and took the rest of the maze in stride, mostly laughing at it and not taking it seriously. One of the ghouls that followed us around even gave us a little wave in return when we waved goodbye to him. Such friendly zombies they have here! Though I will admit one did manage to chase me out the exit. I had dropped my guard by that point. After going through this experience I actually prefer the more Japanese style of ‘horror’ as compared to the American style. It’s more subtle and much more psychological and in the long run, that’s much scarier.

While we were in the back of the park we decided to grab a bite to eat before doing some exploring. There was a small section of rides themed after the children’s show Hamtaro, and since that hit a nostalgia vibe with me I went on them. Just can’t resist cute talking hamsters. After that we tested out one of the water rides, the Drencher Raft which was themed after the ‘Lucky Cats’ that one commonly sees around Japan. We spent the extra 100 yen for the poncho, and that ended up being the best decision of the day. Nothing is worse then walking around an amusement park soaked to the bone, especially when it wasn’t a particularly warm day. The ride itself was pretty tame as rapids go but one second was like being sucked down into a whirlpool, and that was a pretty clever effect. 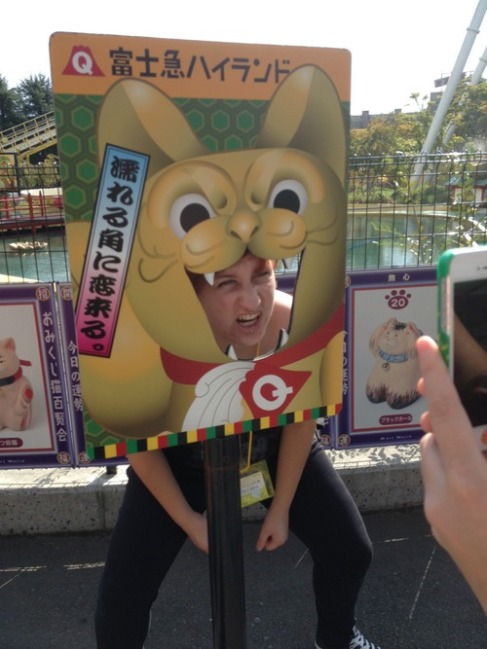 After that it was on to coaster number two! Fujiyama is the brand name coaster for the park, and at the time of its opening was the tallest in the world. That record is now held by Kingda Ka in Six Flags, followed closely by the Top Thrill Dragster in Cedar Point, both passing 400 feet while Fujiyama is 259 feet high. Even if the record is long since beaten, the coaster itself is still a thrill, and sitting in the back definitely makes it better. Gravity is a good friend to have for a thrill seeker. The end bit of the coaster did create a bunch of whiplash by throwing us back and forth in our seats.

After that the plan was to hit Takabisha but of course, it starts raining. And when it’s raining badly enough the coasters have to be shut down. Thankfully we kept the ponchos from the rapids! So making our way to some of the indoor attractions wasn’t that hard. We discovered a mostly abandoned arcade by the Gundam attraction, which had a lot of machines with only one single prize left in them. Pretty spooky since I’ve only ever seen them stocked to the brim. It was empty save for us and rather run down, but we did manage to find a horse riding game which a few members of my group started playing, even though the horses had no ears, poor old things. A few rounds of Dance Dance Revolution rounded out the accidental side trip, and after that, we spilt up for some exploration and shopping in the Evangelion shop.

While we were shopping the rain let up so we made a mad dash back to Takabisha to finally take on the last of the three great beasts. After wearing out the adrenaline it wasn’t quite as exciting but still a thrill to go on and had a nice little Halloween theme, like most of the park did. The steep drop is tricky, as the coaster brakes right before you drop and leaves you suspended for just enough time to regret the decision to ride. It’s worth it, though, and if the drop isn’t enough fun the speed, loops, and sheer smoothness of the ride will be.

By this time it was dark and time was winding down so we finished off the night with a quick spin on the tea cups and a little ice cream. After that it was back to the bus, with a stroll through ‘Little France’, a nice section at the front of the park with a couple of French restaurants, a patisserie, and a miniature of the Eiffel Tower. Once we returned to the bus, we were all exhausted, and the trip home was pretty much spent in slumber. 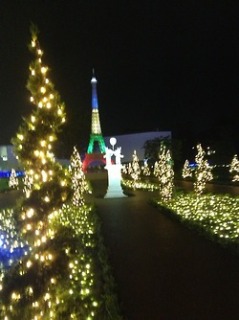 Fuji-Q isn’t the biggest of parks, it’s not even half the size of Cedar Point, but it’s pretty diverse and a lot of fun. Definitely the type of park you can knock out in a day trip, which was good because we didn’t really miss out on anything. And it’s fun enough to want to go back if you ever get the chance. If you ever go, I’d definitely say check out the Haunted House! It’s worth that extra 500 yen for a ticket.