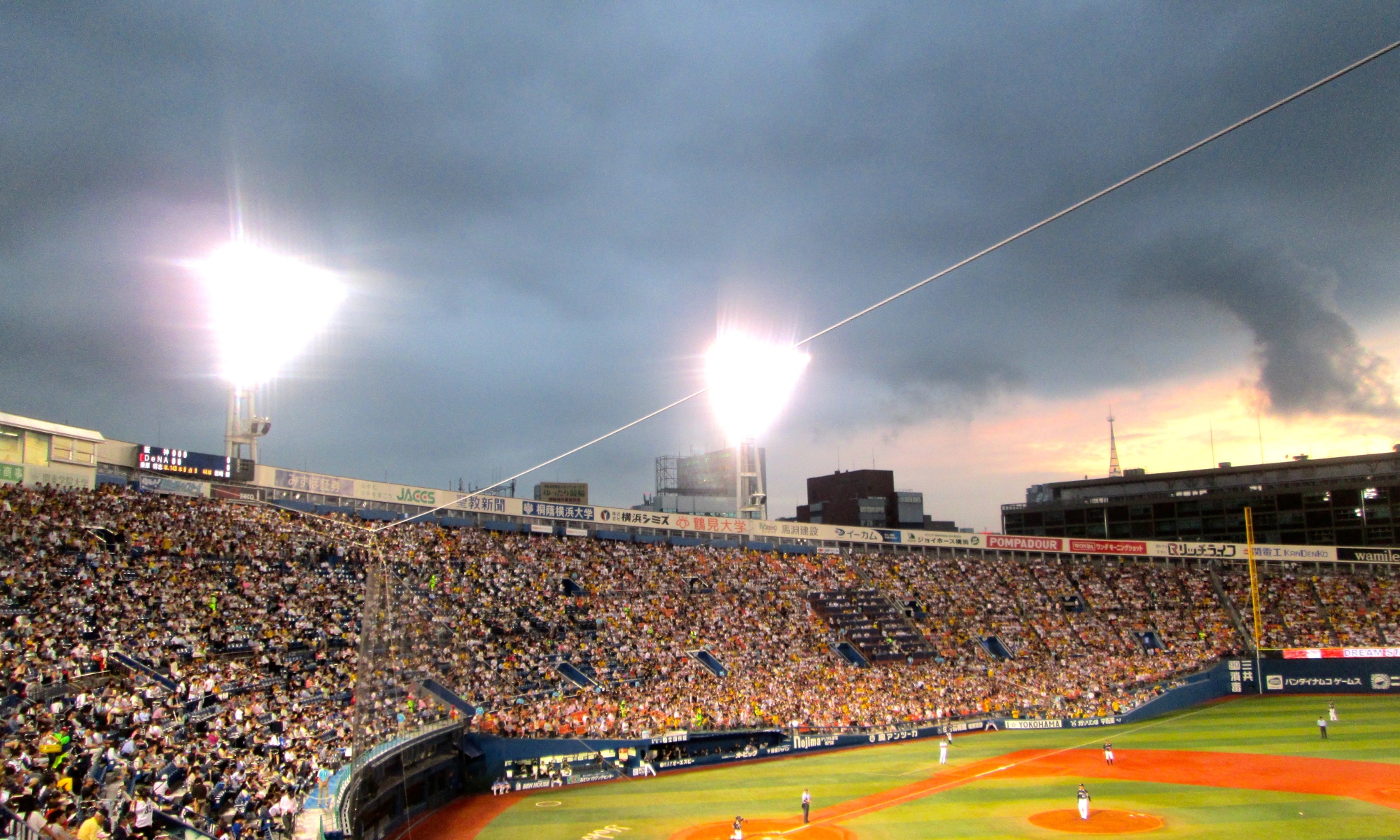 The roar of the crowd, the bright lights overhead, vendors winding their way up and down stairways peddling snacks and drinks? For a moment, the raucous atmosphere of the game left me thinking I was home in Philly, cheering on Utley, Howard, and Hamels. But the friendly smiles of the rosy-cheeked beer vendors selling cans of Asahi for 520 yen stood out in sharp contrast to the sweaty, noisy, gruff old men who hawk $8 Bud Lights at Citizens Bank Park, reminding me that I was cheering for the Hanshin Tigers, not the Phillies. Japanese chants mixed with the English, “God Baystars!” as blue-clad supports rooted for the home team, while across the stadium a sea of yellow and black performed perfectly memorized chants and flag-waving that spurred the Tigers to eventual victory over the Yokohama Baystars. 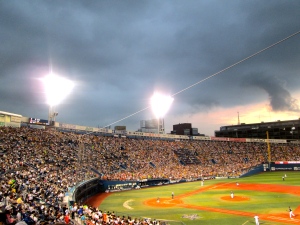 I love a good baseball game. Heck, I even love a bad baseball game (as a Phillies fan, I have little choice in this). The Baystars-Tigers game we attended on Saturday night was scoreless for most of the game, but that didn’t stop the fans from cheering like their lives depended on it. Towards the end of the game, the Tigers finally managed to knock in a solo home run, followed an inning or two later by another home run, bringing their total score up to 3 against the Baystars’ big, fat, zero. Aside from some minor suspense in the bottom of the 9th, the Tigers had the game in the bag, ending the night with a 3-0 victory over the home team. It might be easy to generalize something as simultaneously American and Japanese as baseball, saying that the two were “exactly the same” or that American baseball and its huge stadiums and glittering jumbo-trons are “better,” but the truth is that there were quite a few ways in which the two countries have completely different games on their hands. Sure, the game play is relatively identical, but when you think about it, there’s so much more to baseball than just how the teams function.

In the US (at least in Philly), booing is practically as common as cheering, directed toward both the home and away teams. The opposing team scores? Time to boo! The home team commits an error? More booing! You don’t like the umpire, or the batter, or some random fan in the crowd? Hey, why not boo them, too? I once sat next to a man who returned to his seat in the midst of a volley of boos that were due to a bad call. He look around, cried, “Why is everyone booing? I like booing!” and proceeded to shout and hiss and spit as loud as he could. At the Baystars-Tigers game, there was no booing. None.  Not at all. Half the stadium was comprised of Tigers fan in Baystars territory, and not one of them received a single “boo” from the home team’s rabid fan base! I didn’t know that was possible! The positivity and team spirit of the fans was apparent not only in their lack of anti-cheers, but the precision and enthusiasm of their favored team chants and songs as well. Complex songs lead by trumpet and brass (there was no organ to be found), were sung in full voice by entire sections of the crowd. Volleys of percussive noise flew out into the stands in rhythmic beats as every single Tigers fan hit their noise-makers or clapped their hands or banged on any conceivable surface. Cheerleaders ran out onto the field with the Baystars mascots to lead the enthusiastic crowd in song and dance. The love for the team was apparent in full force, but the seething hatred for the opposition so signature in American sports was conspicuously absent. Everyone was just there, decked out in team colors from head-to-toe, to cheer on their team and have a great time. After the Tigers’ win, disappointed-looking Baystars fans lined up and shook hands with us and other victorious Hanshin supporters, proving that the love of one team does not have to equate being a bad sportsman or sore loser towards everyone else.