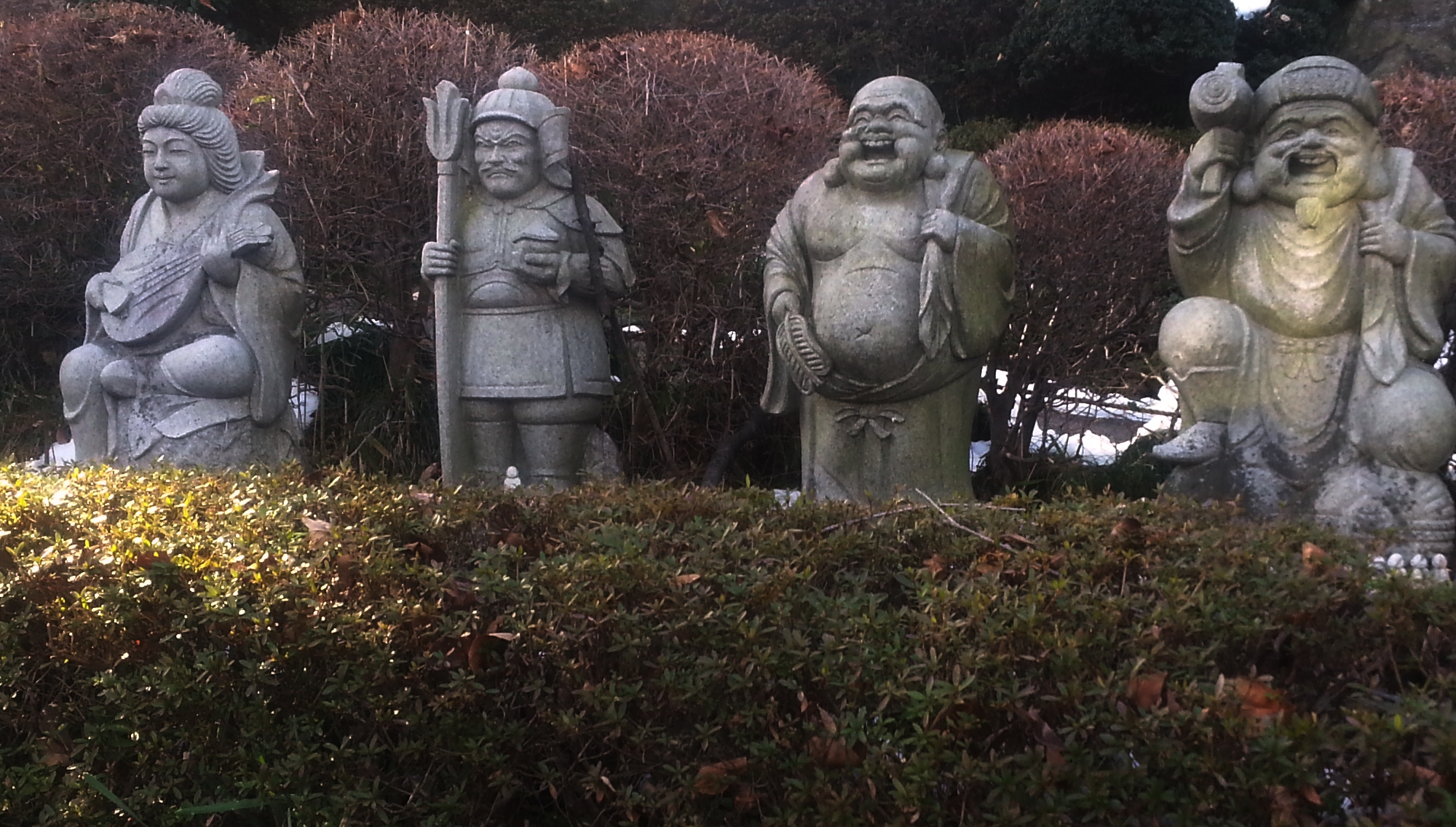 A cold clear day, and the sun shines brightly without its normal burn. A bit of residual frost clings to branches of bushes and trees, and condensation drips into and dampens the ground. And it is silent. Not an uncomfortable, awkward silence but an awed and reverent stillness.

The temple grounds are scattered with a few people. There is the occasional faint rattle of coins that clink their way down into the slatted box in offering, in the hopes that the prayer will be heard. Up ahead looms a giant Buddha that dominates the vision, perfectly polished and larger than life. A serene expression graces its features as if all is right with the world, as if no violence or tragedy rears its ugly head halfway across the globe. Oddly enough, its very presence is humbling.

To the left is a traditional styled building and shallow pond that is framed by a low wooden fence. In the center of the water is what appears to be a small shrine, and the pond itself is bordered by rock outcroppings and sculpted trees that are at once somehow both natural and controlled. A couple of ducks peacefully paddle in the pond, unafraid of human presence. The water ripples with flashes of gold and red as the lithe bodies of koi slice through the surface. It is akin to being suspended in time, and you dare not raise your voice higher than a hushed whisper. Breathe it all in as its serenity settles in your bones and calms your heart.

To the right are a set of stairs that lead below to a row of small statues of wizened old men. Who are they? What do they represent? The paths are well maintained but worn by the many feet that have crossed these same stones. Surrounded by plants that have survived the winter, it is as though nature is barely restrained all around.

Exiting from the back, the road is lined by people’s prayers and wishes in the form of wooden plaques that hang from the board as well as slips of white paper with fortunes that are tied to the strings on the wall so that they will come true. It is like being surrounded by hopes and dreams, and I wonder who these people are. If I have passed them in the streets, sat next to them on the train, and I cannot help but feel such nostalgia and yearning and curiosity all mixed together. It is altogether overwhelming that stepping onto the main street, I have to look over my shoulder for one last glance before returning to pedestrian life. Wow.

I was lucky this semester to schedule my classes so that I don’t have classes a couple times a week. It allows me to visit places without having to deal with the rush and chaos that happens during the weekends, and thanks to that, I was able to absorb the beauty and peace of Jourenji Temple without interruption. One does not need to be Shinto in order to appreciate the landscape and architecture or the uplifting and spiritual atmosphere no matter how clichéd that sounds.

I think if possible, one should visit these little gems during weekdays, because it is easier to connect on a personal level. In the hustle and bustle of weekends, the impact is diminished, and that is a shame right there.