My international experience began in Berlin, the capital city of Germany, in which I accidentally arrived a day early. Despite my parents’ worries that I was going to be kidnapped, I enjoyed this extra day with a sense of independence I never have before.

(A photo of my hostel for this first night – Sehr hip!)

One taxi cab ride, some misguided wandering, and many cups of coffee later, I had adjusted to my new environment and set out to experience one of the most exciting cities in Europe.

Much to my tastes, Berlin is very Dada, and I don’t mean that in reference to the high volume of antiquated artist cafes. Rather, the city is incongruous. It’s nearly absurd, the mix of classical styles next to modern tones. These competing aesthetics and attitudes are what defines the city’s beat: a rapid tempo moving from one idea to the next. Its citizens move at a similar speed. I garnered some odd looks as I strutted down Kantstrasse, gazing wildly at everything around me. When I got cursed at by a passing bicyclist, I knew it was time to pick up the pace and move. 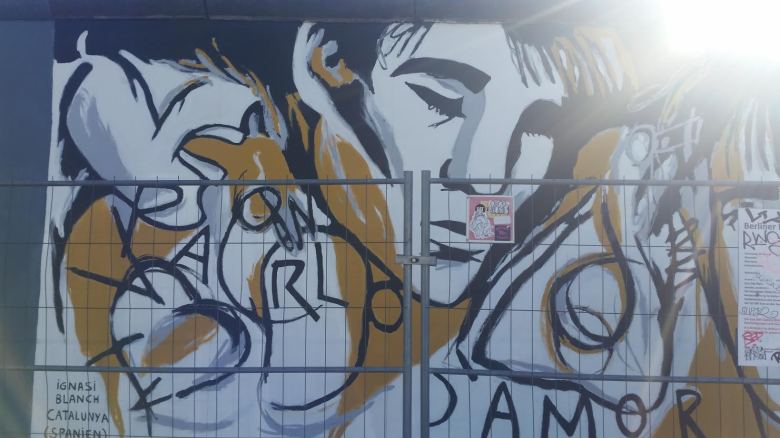 (A view of the Berlin Wall’s east side, sadly obstructed)

I found the city to be hospitable to English-speakers such as myself. Unlike in Norway, where I was scolded for asking to use a restaurant’s bathroom without eating there, the locals here offered help when asked for it. Weird thing to mention, I know. But it’s in this little detail that my impression of Europe has already began to improve.

The next few days, spent with students also attending the program in Leipzig, proved to be a bit more tourist-y but still enjoyable.

Leipzig’s layout is far more segmented than Berlin’s, its neighborhoods more distinct. One can clearly define where the buzzing, consumerist center of the city ends and where the quiet, gray industrial quarter begins. Or where the suburbs that I’ve dubbed the ‘Student Line’ stretches on for miles of super markets and dormitories. This latter area is where the other Temple Owls and I reside, and where the most tranquility lies. Like I said, the city zentrum has buzz. It’s exciting, modern, and crowded with all sorts of life.

Good WiFi is hard to find here. Good WiFi is what sends pictures taken on my phone to my laptop, so this article will go devoid of any good snapshots. Next time, I promise to make this a bit more colorful with pictures of my urban activities. Until then, auf wiedersehen!