I’m now starting my second semester here in Chile, and it’s a lot less overwhelming this go-around. I was the only student from my exchange program (IFSA-Butler) to stay for a year instead of just a semester, so I’ve had the chance to meet the new group, too. It’s a little weird to imagine that just a few weeks ago all my friends from last semester were living with the same families and having similar conversations, similar experiences…but, things change, I suppose. I guess it’s best to think of it, not as your other friends getting replaced, but rather an opportunity to meet new people and create new memories.

One of my first encounters with this new group of gringos (as everyone says here) was the first program excursion of the semester to Quintay, a small sea-side town south of Valparaíso. For most of the 20th century, the whaling industry consumed this quaint town. One of the fishermen who grew up there told us how the water used to be filled with the blubber and blood of the slaughtered whales. It was a brutal industry, but it was profitable and was what paid the bills.

Nowadays, Quintay is a lot more peaceful, a picturesque town full of local seafood restaurants and various dives shops for any tourist that wants to try his or her luck at scuba diving. The water is a beautiful shade of blue, creating a somewhat jarring contrast with the former loading dock right above that was used in the whale business so many years ago. The loading dock was used to drag the whales up from the water, grabbing them by their tails and yanking them onto the platform to then kill them. Almost every part of the whale could be used for something. For example, the blubber could be processed and turned into oil, which could then be used for candles or as fuel in lamps. The bones were the perfect imitation ivory and were also used in corsets and other clothing of the period. 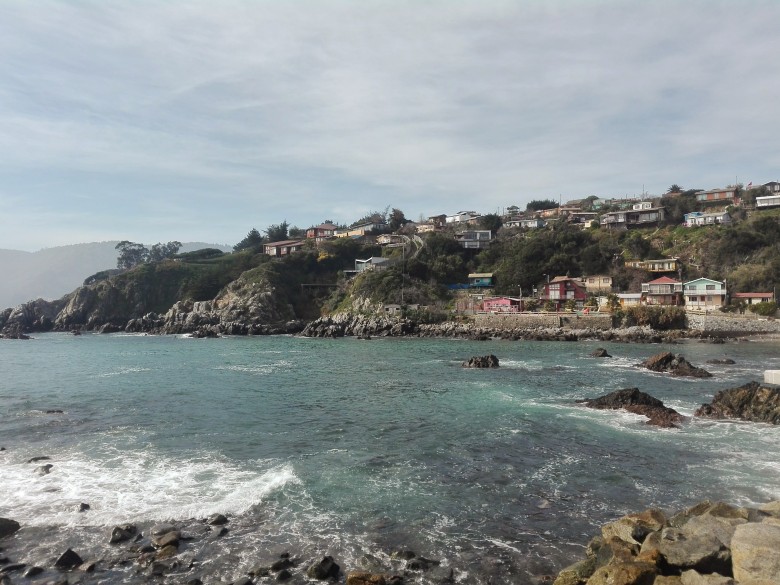 The bones of the whales serve a different purpose now – at least in Quintay. Next to the local university, there is a huge whale skeleton, a sort of homage to the thousands of whales that lost their lives in this seemingly tranquil town. Those who study there dedicate their academic careers to studying the environment and sustainability, specifically regarding the delicate marine ecosystems on the coast of Chile and how to protect them.

Visiting Quintay was really an eye-opening experience for me, and I learned a lot about this part of Chile’s past that I had previously heard nothing about. It was really inspiring to see how a community has come together and tried to erase the sins of the past by educating the community and working together to protect their little paradise for the future generations.