Recently I’ve been spending a lot of time in Concón, a town about 30 minutes up the coast from Valparaíso. Many of my friends live there, so, some way or another, I always find myself there. The other day I saw that there was going to be the reenactment of a battle that had happened there about one hundred years ago, so of course I took advantage of this opportunity to learn a little more about Chilean history. Naturally, the name of the battle is La batalla de Concón – translated as the battle of Concón, and it took place August 21, 1891 during Chile’s Civil War of 1891. 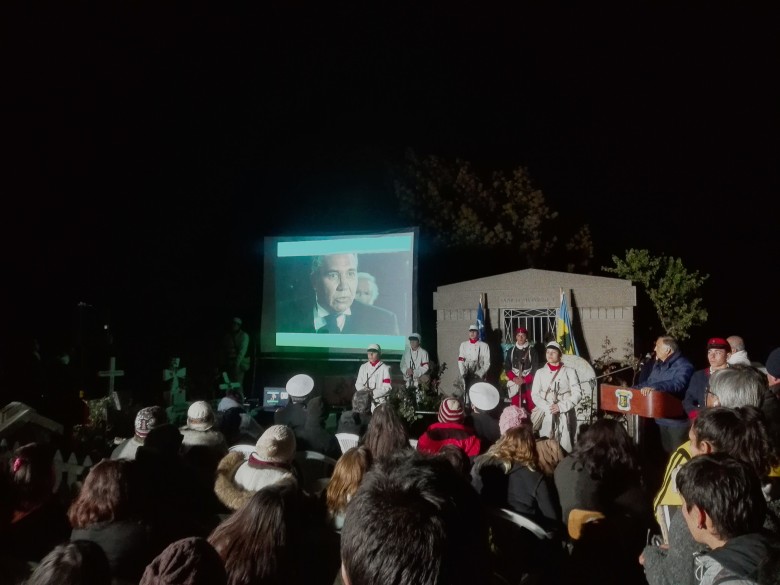 This reenactment was especially unique because it took place in a graveyard. I was surprised because, being from Pennsylvania, when I think of reenactments, I think of my fifth-grade field trip to a nondescript field in 90-degree weather where the Battle of Gettysburg took place. Thankfully, this reenactment was way cooler. The community of Concón had set up all these cool lights and fog machines among the graves, so that, when we entered, the ambiance was perfect for a dramatic retelling of the horrors of what had happened there. I even snapped a picture that may or may not show evidence of a paranormal presence in said-graveyard — the blob in the photo is the potential ghost.

I walked through the graveyard with my friend until we reached the screen and the seats that had been set up to listen to the tribute to the fallen. The mayor of Concón began to speak and gave a compelling speech about what it means to be chileno and how tragic it was that Chileans had fought against their very countrymen right there in that same graveyard. Although I obviously couldn’t relate to the being Chilean part, it made me think a lot about the concept of patriotism and how just being from the same country really creates an almost inexplicable bond. I’ve always been wary of patriotism as a concept, knowing how often it is twisted into and confused with nationalism, but, since living in a different country, I kind of see it in a new light.

Personally, I can’t relate to the type of patriotism that consists of putting the American flag on any and every available object or the kind that ignores the heinous acts committed by the U.S. government under the guise of “protecting the free world,” but I think there’s an important distinction to be made between the patriotism towards the government and history of one’s country and the patriotism that deals with shared culture values and experiences between citizens.

What I can relate to is the latter type, the type that deals with the little things; and there will always be little things I miss about my country and my culture. I miss the summer barbecues where my mom makes her burgers and the special hot dogs that she buys from the butcher. I miss looking forward to Halloween and Thanksgiving as they quickly approach and dreaming about the mass amounts of food that await me. And, right now, more than anything else, I miss August being the hottest month (it’s currently the dead of winter here, and I’m so cold).

So maybe I don’t have a sense of patriotic pride necessarily, but at least a sense of patriotic nostalgia for a few of the little things. Although going to the weird graveyard reenactment was super cool, I think that was what resonated with me more than anything. And, in the meantime, I will start to plan my own Thanksgiving and see if it’ll catch on in Chile, too.