Take a regular train, 臺鐵. It takes about 4 hours from Taipei. High Speed Rail, 高鐵, takes about 2 hours, and a bus, 客運, takes 6+. The bus is the cheapest option, but, it’s a bus. There’s hella traffic, and it’s just an all-around uncomfortable time. The High Speed Rail system in Taiwan is nice, really, but riding some shiny modern bullet train into Tainan just doesn’t fit. Plus, it’s expensive.

The train though, is a humble relic from the 80s. The dirty windows filter in sunlight just enough to give everything a nostalgic haze.  As you go down the island, make sure to look outside the window and inside the train car. Notice how the people change with the landscape, from the buttoned-up salarymen and their tidy Taipei suburbs to the low-key worker and their sleepy towns. It’s like a case study in Taiwanese society.

If you time it right (leave Taipei at about 2-3 pm), towards the end of the ride you’re rewarded with a sunset as you approach Tainan. Here, the train slows, rocks back and forth while everything’s washed in a deep orange glow. Remember this image, in Taipei the same sunset inevitably is rudely interrupted by an imposing apartment block or highway overpass. The sky deepens, and you pull into Tainan.

As you get off the train, take a moment to look around the station. There’s something comforting about old infrastructure like this. The stairs are worn in the middle and the stone façade is stained grey. It’s like the old sofa in your attic. Worn down after years of use. It’s broken in, not broken.

When you step outside, the human scale of the city continues. For a city of over a million people, there’s very few skyscrapers. Put your luggage down and go for a walk. Tainan is made up of courtyards and alleyways. These public spaces are so meticulously maintained by the residents that you feel like you’re stepping into their living room. It feels personal and quiet. Nothing feels rushed or guarded.

If you’re only there for a short time, don’t waste your time going to the night markets. The street food tastes the same in Taipei, just that ambiguous 臺灣小吃flavor. Instead, when you’re walking around, just take a moment to look where the crowds are. If a restaurant is crowded, but quiet, that’s a good sign. Also, like most places in Taiwan, you’re rewarded for waking up early. Tainan is famous for beef noodle soup, but the best places are only open in the morning when the meat is still fresh. 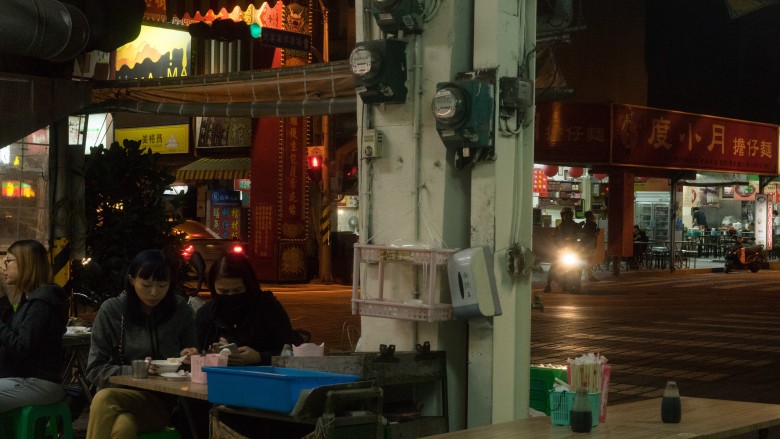 Along with the squid soup, fresh sashimi, and beef noodles restaurants, there’s a local fast food chain, 丹丹漢堡 Dan Dan Hamburger. They sell fast food staples along with noodle soup and Taiwanese style fried chicken, all with a distinct Tainan flavor. Even though it’s a chain, you won’t find it anywhere else on the tiny island. It’s special to Tainan.

It’s things like this that sets Tainan apart from Taipei. Taipei, despite its international appeal and polish, can at times feel impersonal. Tainan, however, is unabashedly Taiwanese, and wants to stay that way. There’s a sense of pride to the way the city is dotted with shrines and decked out with lanterns. There’s no need for polish here, it would only take away the texture and nuance that makes Tainan so beautiful.