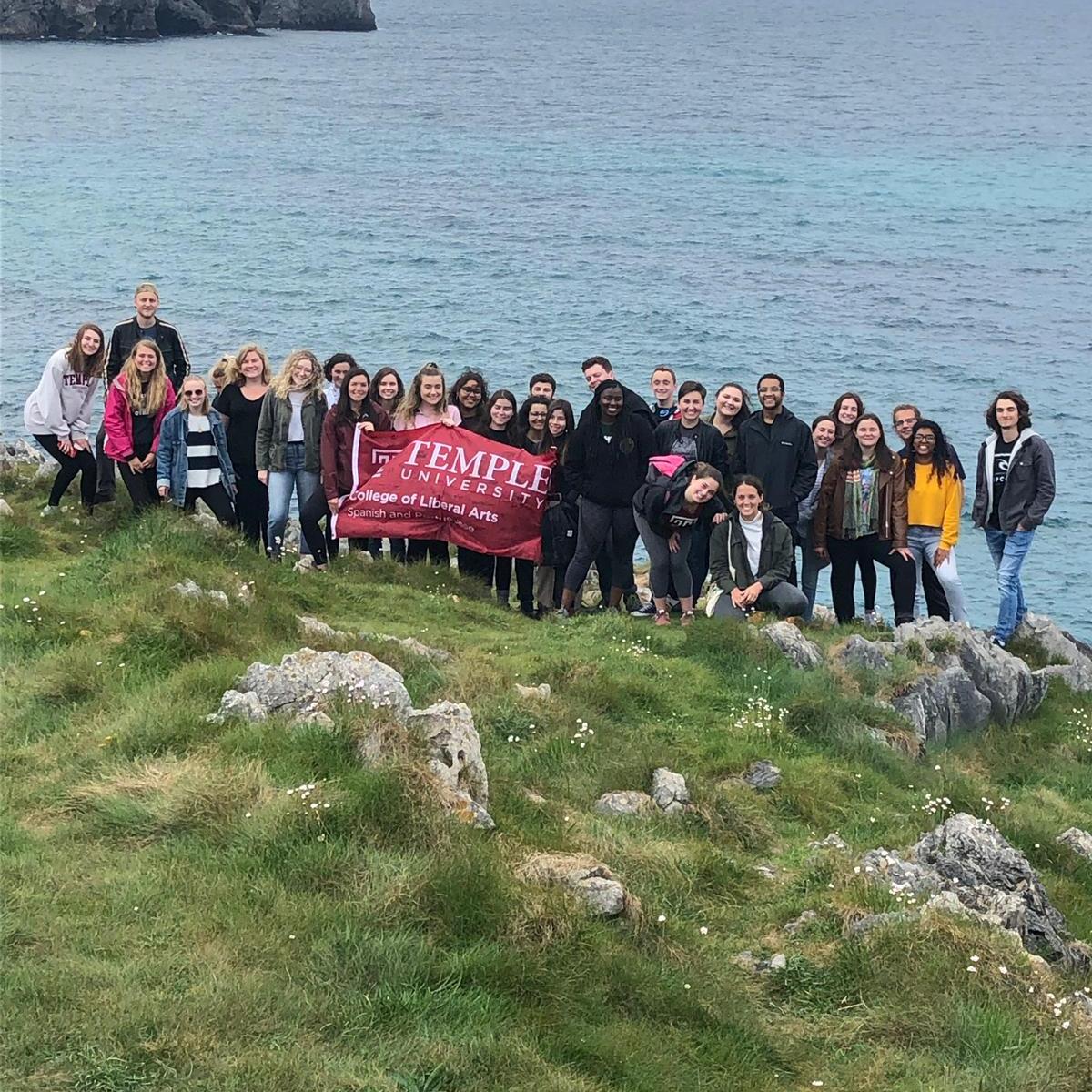 At the end of the semester at Temple Oviedo, the tradition is to take a trip through the Picos de Europa mountain range along the northern coast of Spain. This past weekend, it was finally our time to go. The trip started on 9am on Saturday, and just as the semester had seemed to fly by, the trip was over in a blink of an eye, and we were back in Oviedo by Sunday night. Nevertheless, within those two short days, we got to experience the history, culture, and way of life outside the city. It was an opportunity that none of us would have had if it weren’t thanks to our program director Jaime Duran.

We started the tour by visiting a Paleolithic cave hidden away along the side of the Asturias coastline. Inside the cave, there were three distinct paintings of a deer, bison, and mammoth painted 14,000, 17,000, and 20,000 years ago respectively. Due to the cave’s absence of light and consistent temperature and humidity, the paintings have been preserved extremely well. Our tour guide told us that the very painting we were looking at looked more or less exactly like it did when it was first painted. The whole experience truly opened my eyes to just how long people just like myself had been inhabiting the same ground I had been standing on.

After the cave, we hiked to a portion of El Camino de Santiago, a hiking trail similar to the Appalachian in the U.S. that runs from the eastern boarder with France to the western shores of Galicia. There we were given some time to wander around the volcanic rock that lined the coastline before heading back on the road and having a traditional Asturias lunch.

We then headed to the hotel which was in a small pueblo in Cantabria, the autonomous community (an equivalent to an American state) that borders Asturias. I had brought my guitar with us on account of Jaime asking me to, so it was here where I had the opportunity to play. That night, a couple of friends and I headed over to a plaza across the way where we hung out until 3:00am, playing guitar and singing songs as loud as we wanted to knowing that only thing we could possibly be disturbing was the goats in the mountains. As I’ve mentioned before, I believe in the power that music has to bring people closer together, and that night was no exception.

We had an early start again the next day, driving once again into the mountains where we went to Fuente De. Contrary to the fact that fuentes means “fountain” in Spanish, there was no fountain where we going. Rather, it was a cable car that runs approximately 2,470 feet up the side up the face of a mountain. The difference in height is so great that there is actually snow at the top where it lets off. A truly amazing view, we were once again given free time to explore and take in the view.

After working up an appetite from hiking around, we drove to Cabrales, a small pueblo in Asturias. In Spain, Cabrales is famous for a specific type of blue cheese, appropriately called queso de Cabrales. After a large meal of every possible Asturian dish imaginable, we took a tour to see how the queso was made and then fermented in a cave. Afterwards, he took us to a llagar, or a place where sidra is made. Before entering, Jaime told us that this is the llagar where the sidra “falls from heaven.” And sure enough, he was right!

The best part about the trip was the opportunity to see an entirely different culture. Even though we were just an hour or so outside the city, the way of life was completely different. Cabrales was a town of at most 70 people, all of whom lived and worked together, sharing community caves, pastures, and fields. Our guide Manolo was also the restaurant owner. Everything that we had eaten from the queso to the sidra had been grown, harvested, or made by him. I couldn’t have asked for a better way to bring our time in Spain to a close.