I knew I wanted to study abroad since I was in high school and wouldn’t let anything hold me back from that goal. It would be my first time leaving the country and I was so excited, but there was one main thing I was worried about. You see, every time I meet someone new, especially if I have to live with them, I get worried. Why? I’m gay! And as proud as I am for fully embracing myself, I still worry that others will look down on me (no matter how much I pretend I don’t care). I don’t blame myself for that worry. I have experienced a lot of judgement for being a masculine presenting person that was born a woman. People often judge me, as they do others, before they know my name. Based on my appearance people often assume I’m gay and that assumption brings mixed reactions. I wear men’s clothes, really like working out, and have short hair. Why do I do this? Because that’s who my authentic self is and what I feel good doing. But, I still worry that people will hate me for who I am.

So, when choosing a study abroad program, I researched what countries it was legal and accepted to be LGBTQ+ in. I eventually found myself going on the Northern Ireland (NI) program. I was comfortable going because I had researched and learned that although same sex marriage wasn’t legal, the majority of the citizens thought it should be. You see, Northern Ireland took much longer than other UK countries to legalize same-sex marriage. England and Wales introduced the Marriage (Same Sex) Couples Act in 2013. This act made same sex marriage recognized by the government. Religious institutions were given the option to opt in to marry same sex couples or be able to opt out. So although it didn’t criminalize institutions for opposing the marriage, it granted the right to do so where permitted (baby steps are better than no steps eh?). Scotland quickly followed, legalizing same sex marriage in 2014. But Northern Ireland’s DUP, Democratic Unionist Party, continued to oppose same sex marriage until eventually in 2019 something magical happened (dramatic pause)… the Members of Parliament voted to legalize same sex marriage!!! Yayyy! In January 2020 following the enactment of the Northern Ireland (Executive Formation etc) Act 2019 , same- sex marriage was offically legalized. The first same-sex marriage ceremony took place in February of 2020.

Now, back to my study abroad experience! The first time I met the peers I would be traveling with, it was very surface level. We got to learn each other’s names and majors but that was about it. The real learning of who was who came the first day in Northern Ireland. Everyone in my program was so excited to be there and learn about each other and the beautiful country surrounding us. We gathered in one of the dorms and talked for hours. After getting comfortable, I hesitantly told everyone I was gay, to which I got the “wow, no way, really” (aka, yeah, we know, we don’t care). It turns out there were other LGBTQ+ members in my group! The people that weren’t LGBTQ+ weren’t just accepting, but fully embracing everyone as people. I got lucky. The people in my group were all open- minded and accepting of others. My labels didn’t matter. I think the only thing they judged me for was my drink of choice.

One weekend my group and I decided to take the 8-hour trek down to Dublin. On the bus ride there I had posted something on Snapchat that I was going to Dublin. A friend I had met in NYC was also there and asked if I was going there for Pride weekend. We didn’t even know it was Pride that weekend! My group and I were just going to see the city but were so excited when our hostel greeted us with Rainbow flags and a Pride event schedule.  We decided to check out the Pride scene and wow, it was one to remember. The streets were flooded with LGBTQ+ members and allies. There were beautiful floats, people of all genders holding hands and feelings of love and acceptance in the air. Just four years after gay marriage became legal in Ireland (not Northern Ireland) this parade was a sign of no turning back (I studied abroad in 2019). 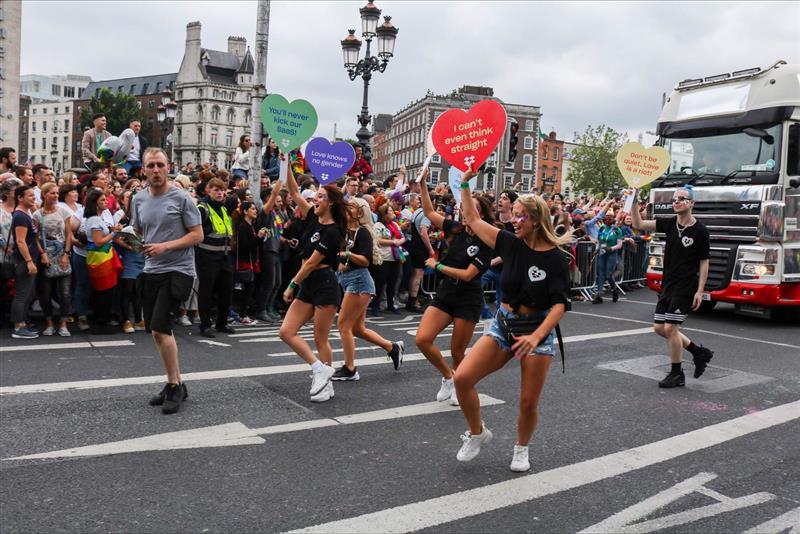 Advice to other LGBTQ+ people that are concerned about studying abroad

It’s scary going to a new place with people you may have never met. Luckily, you aren’t alone. People like me and so many others have taken the leap of faith and ended up with amazing experiences. To make yourself more comfortable, become familiar with the laws, history, and culture of where you’re going. This will help you adjust to the reactions you may receive when you study abroad. When you meet the group you’ll be going abroad with, try to make friends. These are the people that will stick with you no matter what. Everyone wants to feel accepted and have a good group to travel with when abroad. If you are worried about anything else, stop by the virtual front desk. All of the peer advisors and coordinators are amazing and will support you in whatever you need! Love is love 🙂

Be sure to check out more posts on this topic and visit our website for LGBTQ+ resources.