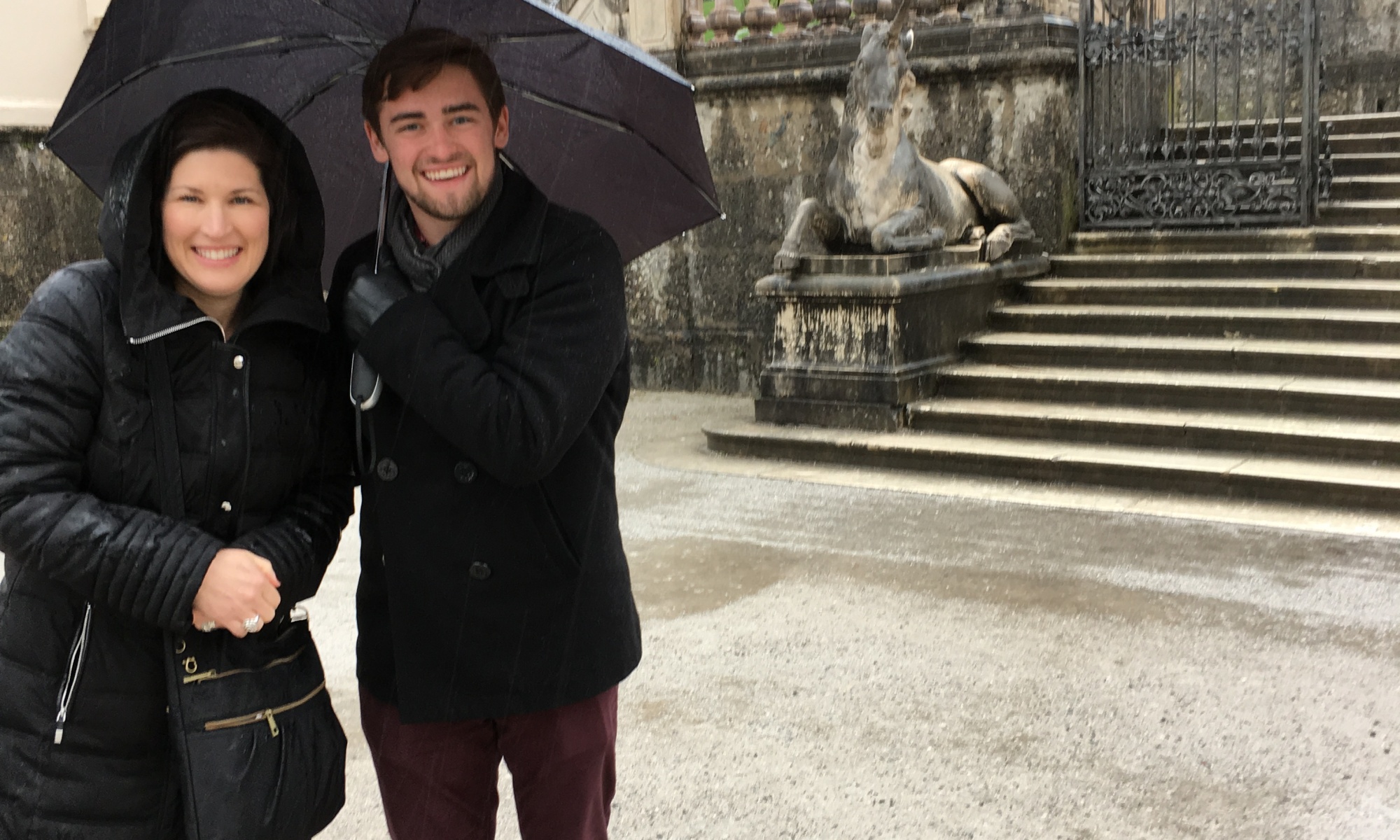 This past weekend I went to Munich to visit my aunt who finished a business trip. I arrived very late on Friday night to her hotel. We had a couple drinks and chatted. It was so nice to see someone from my family again. We got to sleep early, because the next morning we were going to Salzburg, Austria for the day.

We had to be at the train station by 9AM. We made it on time, surprisingly. My aunt and I are known to be late all the time. But we made it! The train ride lasted about an hour and twenty minutes. We didn’t get to see the Alps because it was so cloudy and raining.

Most of the day it rained, but that didn’t stop us! We followed our tour-guide through the city and saw Mozart’s house, some scenes from the Sound of Music, and later ate Kraze-Kramer’s! They’re frankfurter’s with cheese on the inside in a sandwich with mustard. It was soooooo good! I bit into it, and it splattered all over my aunt’s jacket. I pretended I didn’t notice for a couple minutes until I pointed it out.

We saw cathedrals, walked around beautiful open-air markets, and stores. My favorite part was taking a lift to the mountain overlooking the city. We could see the entire city from there. Here is a picture:

We walked around up there for a while and saw that there were even more views to be seen. That night I went to the Staatliches Hofbräuhaus (The Royal Brewery) a pint of beer and some frankfurters with potato salad. They played traditional Bavarian music and saw some people dancing in the central hall.

The next day we went to the Schloss Nymphenburg (The Palace of the Nymphs), which is modeled partially after Versailles. I am a sucker for Rococo architecture, so I was in heaven when I saw nymphs flying on the paintings on the ceiling. My aunt and I took a tour of the palace and then walked outside in the gardens. There were ducks and wild animals around, and it was very nice to catch up with my aunt.

After that, we decided to go back to the city center to see the Rathaus-Glockenspiel, which is a big clock on a cathedral in the center square (Marienplatz) at 5pm, when it rings and marionettes dance. After this finished, we walked to the English gardens and saw the sunset. We walked to the beer gardens, despite my aunt’s hesitations, and in fact the beer gardens were opened! We each had a beer, bread, and an artichoke heart. On on walk back home I got a McFlurry and we went back early because my flight Monday morning was very early the next morning. I caught a train at 4:40AM and got to my 7AM flight on time.

When I got on the plane I had a smile on my face with memories to remember for the rest of my life, as a turned my thoughts to my life back in Lyon.