During my preliminary research on things to see and do in Leipzig, my interest in Dadaism and the 1920s Weimar culture led me to discover that this city had its own cabaret club. One email later, I was connected with the Leipziger Central Kabarett’s Meigl Hoffman, a frequent performer. His acts contain themes both political and hilarious.

First, though, Meigl took me on a tour of the Frank Capa House.

It was here that Frank Capa, wartime photojournalist, took the photo “The Last Man To Die” (1945). 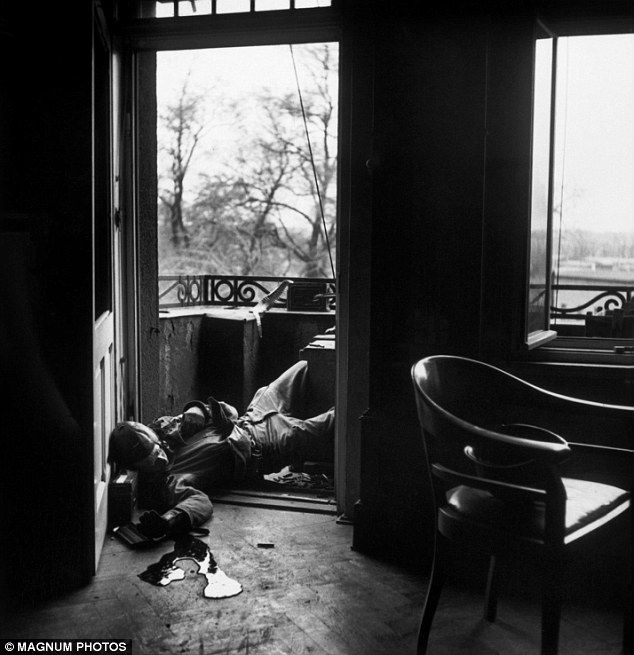 The soldier lying there, one of the last lives taken in the waning days of WW2, is Raymond J Bowman, twenty one years old at the time and hailing from Rochester, New York. Driving into the heart of Leipzig to liberate it from the Nazis, Bowman and accompanying US Army machine-gunner Lehman Riggs positioned themselves in the upper levels of the  house. Down the street…

… German snipers tried fending off the US advance for as long as possible. The photograph of Bowman as a casualty served as a powerful anti-war message. It still does today: the Capa Haus, also a cafe, is now a monument to wartime photojournalism. Interviews with Lehman, displayed in the museum section of the house, further strengthen the impact that one young man’s death has had.

In America, where most of our historical battlegrounds are relegated to the rural scenery, it might be hard to imagine what house-to-house, street-to-street fighting could be like. More amazing is the normality that is restored to these areas once they are rebuilt.

The streets shown earlier are now frequented by passerbys on their way to work or clubs. The trams run where Panzers and Sherman tanks used to crawl by. Meigl shared a family anecdote with me while we waited for a taxi ride back to the cabaret.

He pointed out to me down the street where his father, only twelve years old at the time, witnessed the Americans’ liberation of his city. As described in a video at the Capa House, not everybody welcomed the foreign soldiers. A lot of Germans, though, were grateful for someone to free them from the Nazi regime. Meigl’s grandmother, Isel, supplied them with chocolates and cigarettes, as well as a place to rest.

Meigl’s own experience with foreign military personnel has been different. Growing up in the days of German separation, he can easily recount the curtness he received from Soviet soldiers that occupied his part of the country.

Back at the cabaret, I met a theater student, Leonie, who also directed some dadaist programs at Meigl’s club. Many people are moving to Leipzig for work and education. Leonie arrived for the latter. Hot new art scenes are popping up in several neighborhoods, while older ones are turning over and dying. While in Berlin, I overheard that many leave the capital for Leipzig to find a new musical pulse. It’ll be interesting to see, if I come back, how this city grows up.

Meigl performed his piece _____, a satirical program that involved the Mona Lisa, 9/11, John F. Kennedy, and quantum theory. It was all comically nihilistic, and in that sense, rather uplifting. After his show had finished, I took the stage as a guest performer to recite the poem “An Anna Blume,” by Kurt Schwitters. 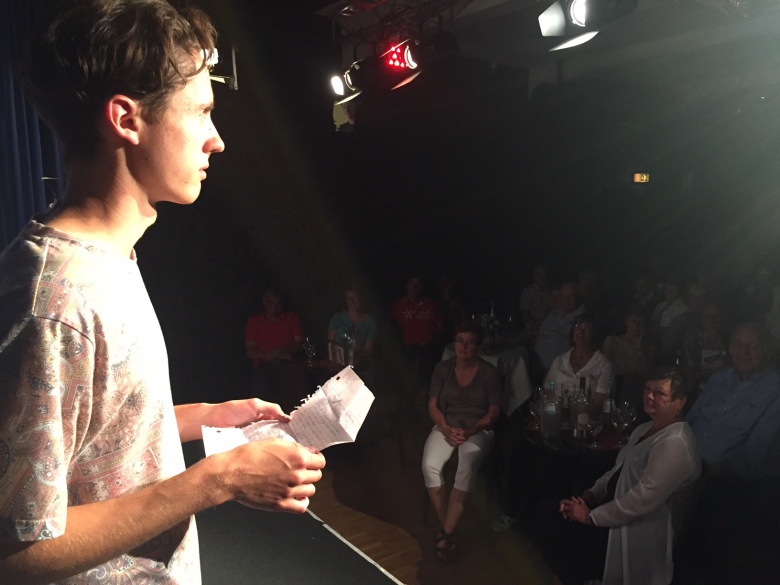 I went into this experience expecting very little: to be shown the Capa house, see a performance, leave with some food for thought… Instead, I made great friends with a variety of characters. The technician (an anarchist on the side – or maybe it’s the other way around?) reminded me after my performance that my experiences, doing what I love, can never be taken away from me. I left the cabaret for Goethestrasse to catch my bus at with a feeling of unmatched optimism… for the weekend I would spend visiting Poland, for the last week of class I would return to, and for everything to come in the future.

(Meigl Hoffman and I, in front of the Central Kabarett)