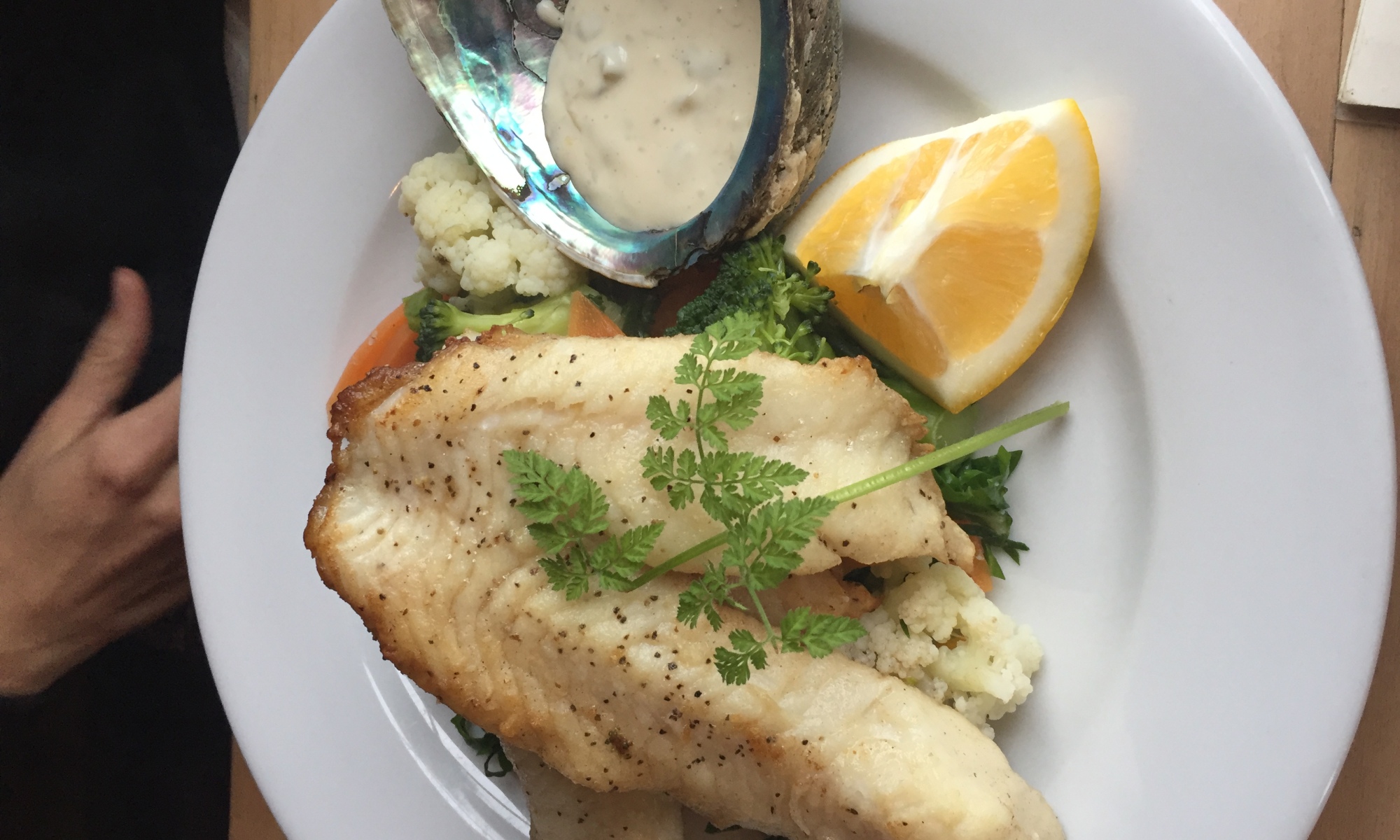 It is a Monday morning, and I have not gotten enough sleep. Outside, a miserable sheet of rain is unleashing its wrath on the few students who have summoned enough courage to venture outside. I am not this brave. In fact, I doubt that I will drag myself out of bed for another hour or two. However, I suddenly remember that I can’t miss my 1 pm geology lab, making fruitless attempts to find my hairbrush and put together a normal outfit. Food is less that an afterthought; if I had to rank my daily priorities on a scale from one to ten, eating would be a negative number. Instead, I stop by the coffee cart outside of Paley Library, gulp down the last milky dregs, and rush to the lab.

It is a Monday morning, and I have not gotten enough sleep. Outside, a miserable sheet of rain is unleashing its wrath on the few students who have summoned enough courage to venture outside. I do not have a morning class, but I should really mobilize and work on a few essays that will be due in the upcoming weeks. However, the constant grey-ness of Dunedin has really been bumming me out, so my motivation for work is low. I decide to have a treat-yo-self kind of morning to raise personal morale, throw on a sweater, and head to Good Earth, a really awesome local café by my flat. One thing that New Zealanders seem to have down is the art of egg-making; whereas Americans seem to be constantly scrambling theirs, Kiwis enjoy a wide range of fancy egg preparation, from frying to poaching to boiling. I decide to embrace fancy egg culture and order two poached eggs in Hollandaise sauce with a layered potato cake. As I wait for my breakfast to arrive at my table, I crack open “A Tale of Two Cities” by Charles Dickens and sip a flat white. When my meal arrives, it is piping hot; everything tastes amazing and I spend more than an hour just relaxing, munching, and reading. With a full belly and caffeinated brain, I eventually depart, fueled and ready to work on essays at the central library.

Notice a difference? In terms of activities that are imperative to human existence, eating is one of the most significant. Eating culture varies from country to country, with each state, province, or territory exhibiting its own unique subset of foods or eating traditions. When I was younger, I was reminded of this constantly by my grandmother, a cooking enthusiast who understands that the process of eating is one to be celebrated. In the mornings at my grandmother’s apartment, I would always sit at the same spot at her dining room table, laden with a beautiful fabric placement, different glasses for juice and tea, perfectly arranged silverware, and my favorite plate- one that showed four chubby chefs preparing a meal. With unmatched grace and agility, my grandmother would lay out our breakfast bounty: crisp toast, eggs, fresh fruit and yogurt, and the occasional bacon. I think that when I am preparing to die and reflecting on my own human experience, these breakfasts with my grandmother will go down in the top-ten best memories from my existence, though they may seem inconsequential.  Nothing to think about but the complexity of the music accompanying our food, the process of eating, and the pleasure of one another’s company. My grandmother is the sole person that I credit with teaching me to thoroughly enjoy and appreciate a really good meal.

It makes me sad to think about, but eating culture in the United States is trash. This sounds harsh, but compared to many places around the world, it’s kind of true. America has been the ultimate proponent of worldwide fast food grab-and-go culture. Nothing says “I don’t have time to enjoy or care about what I’m putting into my body” like a $2 Whopper special from MacDonalds or an enormous, extra sugary Dunkin’ Donuts coffee to go. The purpose of FAST food is to spend as little time as possible savoring the food that one eats, enjoying the time spent eating, or reflecting on the physical act of consumption. As a result, the quality of prepared foods in the United States has fallen miserably to the point where we barely care if we’re putting wholesome ingredients or absolute garbage into our bodies. This has led to reduction in price of high-demand, terrible cheap foods and an exponentially expensive cost of eating well.

Living in New Zealand has given me a heightened respect for both the process of preparing foods, the origins of the food that I purchase, and the activities surrounding consumption. Almost the food that I eat comes from the local farmer’s market or Veggie Boys, a tiny shop that sells beautiful veggies for cheap. Instead of blindly walking into a supermarket and picking up items, I have started to contemplate various facets of production that occurred between development my food item and the incident of purchase. Did my kale from a farm that uses sustainable growing practices? Did this piece of salmon come for a large-scale fishery that doesn’t consider the ecological impact of irresponsible mass fishing? What type of lives do the goats that produce my cheese experience? New Zealanders are so big at sustainability, limited wastefulness, and conservation that these questions will now inevitably pop up as I grocery shop. Now, the process of cooking a meal has derived new meaning as well. After a stressful day, I like to turn on some peaceful music, carefully lay out all of my ingredients, and being lovingly arranging them into a meal. Cooking reminds me of the careful, precise techniques that I employ for research at my lab at home. The practiced motions of each activity bring me a kind of numbing, happy peace. To the subconscious mind, is there a difference between measuring out a graduated cylinder of 1M HCl and pouring vegetable oil into a measuring cup? For meditative purposes, I would argue that there is not. In New Zealand, I also have the pleasure of enjoying nightly flat meals with all of my flat mates, which is refreshing as I normally eat quickly and alone. Through these dinners, I have really bonded with the people that I live with, and have had the pleasure of trying typical Kiwi meals that my New Zealander flat mates prepare.

It would be ridiculous to say that I’ll never participate in “grab and go” food culture again in the United States. Let’s be honest: some fast foods (hello pizza) are amazing in their own greasy, delicious ways. To say that I won’t hit the Mexican burrito stand at least twice during my first week back in Philadelphia would be a lie. However, I want to extend my newfound appreciation food preparation and enjoyment to my friends and family back at home. Instead of munching on pasta in my room as I churn out my latest assignment, I will force my roommates to put down their work, sit down together, and eat some good food. Of all of the best relationships, moments, and memories of my life thus far, most of them revolve around consuming, preparing, or gathering around amazing meals. 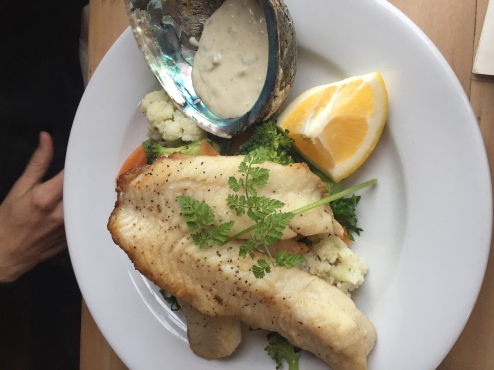 An amazing dish from Fleur’s Place, a seafood restaurant in Moeraki. 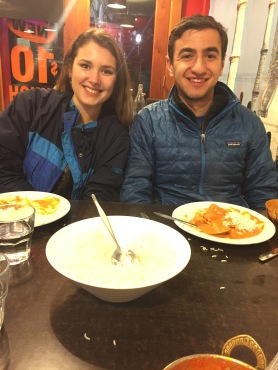 My flatmates Rylin and Jonathan enjoying curry at our favorite Indian restaurant in Dunedin, the Taj Mahal.