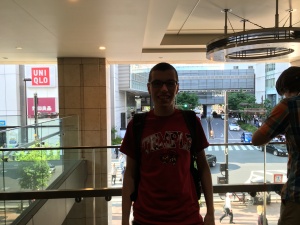 Since my last post, I was finally able to get a full tour of Temple Japan’s campus. Temple Japan consists of just two buildings, much smaller than Temple’s main campus. Each building is a few blocks away from each other, but I personally enjoy that because it motivates me to explore the area more when going between the buildings. There’s also a bridge along the way that has a great view! 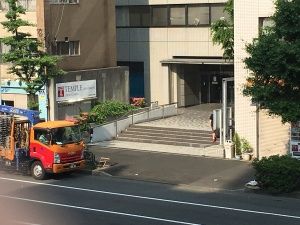 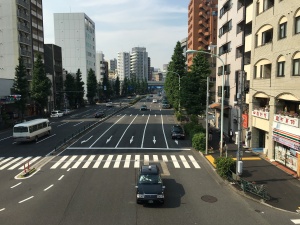 On Friday, I went to a Temple-sponsored party for all the new students on campus. It was great to meet other people outside of my dorm. I even made a few new friends that I later found out were taking some of the same classes as me. At the party, we played some games and then were presented with a delicious meal. Overall, it was a fun time.

The next day, a few of my friends showed me a hidden trail just a minute or two away from our dorm. Apparently Alan found the trail last Thursday and had been using it ever since for his run. It was a nice day out, so I decided to join my friends in their run. It was a nice, quiet trail with a lot of nature and a pretty stream alongside it. There were also one or two interesting buildings as well. I’m not sure how much I’ll personally use this trail, but it was very cool to see. 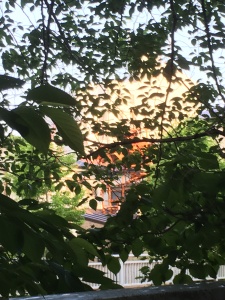 My classes officially started this Monday. I picked some enjoyable classes, so I wasn’t too nervous about them. The only class that may give me some trouble this summer is Elements I, the beginner course for learning Japanese. I don’t need to take this course, but I chose to take it not only because I want to better understand people here, but also because I’ve had an interest in learning Japanese for years but never knew where to start. The course seems difficult with a quiz nearly every class, but honestly, I’m prepared for the challenge. Since I’m motivated to learn Japanese anyway, I should have no problem preparing myself for the workload ahead. For anyone reading this who wants to learn Japanese but isn’t sure about taking the course, don’t feel intimidated. If you’re really passionate about learning the language, it’ll be worth the effort.

Classes starting also means it’s time to choose what club I want to join. There are about 13 clubs in Temple Japan. Some are simple, fun clubs like the Video Gaming Club and the Volleyball Club, and others are clubs I’ve never heard of before like the Historical European Martial Arts Club. A lot of the clubs intrigued me, but I’ve narrowed it down to the Video Gaming Club and the Go Club. For those of you who don’t know what Go is, it is an ancient Chinese board game where players play on a 19 x 19 board and try to surround more territory than their opponents. I’ve never played it before and don’t know a lot of the rules, but it sounds fun with all of the strategy behind the game. I’ll probably end up choosing the Video Gaming Club though because I really enjoy video games and feel like I’ll connect with people more in that club. Either way, I’ll be sure to talk about my new club in my next blog. Until then, Sayōnara from Japan!